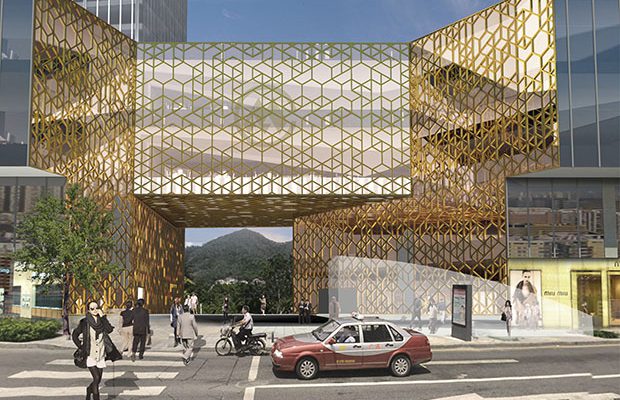 This month has seen another fantastic win for the Corlette team, having been commissioned to deliver the Retail Plaza and Offices wayfinding and signage programs for the prestigious OMA Prince Plaza project in Shenzhen China.

Based in Shekou, an industrial area that has been transformed into a financial and cultural hub, Prince Plaza exists in a world filled with the juxtaposition of old and new. Drawing inspiration from the contrasting surroundings, Prince Plaza aims to become a part of the repositioning of Shekou by creating a space where old and new can co-exist.

Corlette will be working alongside the reputable Rem Koolhaas’s Office for Metropolitan Architecture (OMA) to create an innovative and unique space that connects the differing aesthetics of the city.

Camille Corlette, Global Creative Director, has said, “Prince Plaza is a natural fit for us as we are focused on delivering high-concept excellence across Asia, such as that required by OMA. This win is part of Corlette’s continued expansion and success in Southeast Asia. ”

The Corlette team are also currently working on another project in Shekou, creating an urban wayfinding and signage program for the Prince Bay development. Our team is increasingly commissioned for urban wayfinding, with programs currently underway for Thaiwoo Village in China, and Ayla Resort in Jordan.

Henri Mariasson, Global Director of Projects, noted, “Urban-planning has become a natural extension of our expertise in luxury hospitality. Increasingly, developers are focussed on delivering wholistic design strategies across entire precincts, rather than seeing design delivered piecemeal, by function.”

Global leaders in experiential branding and wayfinding.
40 years of luxury, hospitality and lifestyle design.
Welcome to Corlette, where great design ignites the senses.

For more on Prince Plaza